Active haptic feedback and beyond – the future of touch interaction 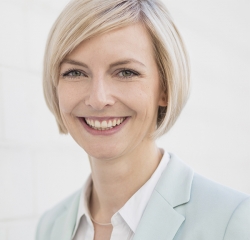 What is your presentation about?

Touch-sensitive surfaces in automotive interiors have been around for a while and there is no longer anything extraordinary about them. However, adding active haptic feedback as an additional cue to touch-based interactions opens up new possibilities for the design of user interfaces. Therefore, interfaces that were long seen as high risk can now be realized and are even on the edge of becoming an automotive reality. One example of this is Hyundai’s touch steering wheel development. With active haptic feedback, an enriched user experience can be created directly at the tip of the user’s finger. However, its potential to become part of the brand signature has not been exploited yet.

Newton already said in simplified terms, “To every action there is a reaction.” With this in mind, active haptic feedback can be explained as the reaction of a pressure-sensitive surface to a touch interaction. When the pressure impact on the surface exceeds a certain threshold, a haptic feedback is emitted by an actuator. In comparison, a conventional haptic feedback is already created when the capacitive surface detects skin contact.

With active haptic feedback we have the great opportunity to create a sensation directly underneath the tip of the user’s finger. We let users feel the interface and through that we let them experience the brand with their tactile sense. Physical interfaces like buttons are now finally realizable as exact virtual representations and with a unique brand-specific character as the perception of the virtual buttons can be designed and tuned very precisely.

Furthermore, customizable cockpit settings are becoming increasingly important. Now this trend can also be rolled out on the haptic feedback of digital interfaces, providing drivers with maximum freedom of personalization and strongly improving the usability and user experience at the same time.

Actually, it wasn’t the active haptic feedback that was seen as a risk. There was the assumption that positioning interactive interfaces – and in most cases this currently means touch displays – in certain areas of the vehicle interior will create a high level of distraction. Of course, if the visual content on a display changes constantly it will attract the driver’s attention and can cause distraction. Nevertheless, this should not automatically label touch surfaces and in particular displays as being dangerous per se. By combining them with active haptic feedback and defining their purpose and position thoroughly, new interfaces can be enabled that are safe to interact with even while driving.

How does Hyundai’s touch steering wheel work? What reaction has there been so far?

For distraction-free driving, we replaced all mechanical buttons and switches on the steering wheel with touch-sensitive controls in the form of touch displays with active haptic feedback. This haptic feedback permits blind operation while driving. It is realized by means of a haptic feedback actuator that enables freely programmable feedback patterns, and can be used with displays of almost any size.

In the latest development steps, we conducted a driver distraction study to evaluate the usability of the touch steering wheel interface while driving. In our research we focused mainly on the learnability, intuition and potential driver distraction of the new steering wheel interface. For all use cases, the results of the study clearly showed that the touch steering wheel is significantly below the limits of the globally acknowledged motor vehicle safety associations AAM and NHTSA. Even for the more complex use cases, all test persons indicated only a slight distraction, which was perceived by them as noticeable but not as strenuous or interfering with the driving task. Furthermore, the participants of the study extolled the visual and haptic feedback and the reduced and intuitive structure of the prototype.

Is there a risk of overloading the interior with too much haptic feedback?

Even positive technological developments can harbor risks if they are used carelessly and all over the interior. However, I don’t see the risk of using haptic feedback excessively, because that would automatically go hand in hand with an excessive number of interactive surfaces in the interior, and the current trend here is going in the direction of ‘less is more’. Nevertheless, the use of haptic feedback should be thoroughly considered and planned when designing the user interface. A high level of acceptance among a wide range of users can only be achieved through consistent and understandable integration of haptic feedback in interiors.

Don’t miss Regina Kaiser’s presentation at the Future of Automotive Interiors Conference Europe. More information about the conference and its most current line-up can be found here.